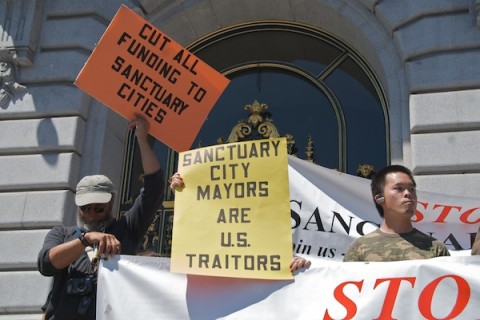 San Francisco’s sanctuary status since 1989 is battling with the federal government’s immigration enforcement program which city officials fear will lead to racial profiling.

Secure Communities is an agreement between the California Justice Department and Immigration and Customs Enforcement that was enacted in June. The program requires local police officials to share arrest data with ICE and check an individual’s legal status by running their fingerprints through a national database. If they are found to be in the U.S. illegally, they face deportation under custody.

“There is a serious problem with lack of transparency and secrecy regarding the so-called Secure Communities program,” said Angela Chan, police commissioner and staff attorney at the Asian Law Caucus. She said even if the arrested individual is found innocent of charges against them, they still face deportation.

Virginia Kice, western regional communications director at ICE, said S-Comm does not require San Francisco to enforce immigration laws. Instead, data is shared with the FBI and immigration officers as it has been for years.

“ICE independently enforces the immigration law as appropriate if a person in criminal custody is subject to removal,” she said.

According to a letter addressed to the Justice Department by Secure Communities Executive Director David Venturella, S-Comm is meant “to improve community safety by identifying, detaining, and removing all aliens convicted of serious crimes who are held in state or local correctional facilities.”

ICE’s website describes plans to have S-comm in every jail in the country by 2013.

Although S-Comm is aimed at high-level offenders, data shows that many arrested have been deported for low-level crimes and misdemeanors related to traffic citations. California has deported nearly 15,000 people through the program, the highest number among states where S-comm is active. Data from ICE shows 3,875 individuals were deported after being arrested for non-criminal charges between Oct. 27, 2008 and June 30, 2010.

“This is a setback in a society,” said Raul Barrera Esteva, 20, an organizer with People Organizing to demand Environmental and Economic Rights. “It is really sad that society and the government is wasting all the undocumented students which are the future doctors, teachers, lawyers and many other important professions that are needed in this country.”

Esteva is an undocumented student but is able to attend college in California without worrying about ICE gaining information from the school about his legal status.

According to Ariana Gil, Outreach Coordinator for the Mujeres Unidad y Activas, five protesters were arrested on Oct. 5 after refusing to leave the immigration rights rally outside California Attorney General Jerry Brown’s office in the city.

“Five percent of the deported individuals happen to be U.S. citizens,” Gil said. “So this program actually impacts everyone, not just immigrants.”

Immigration activists expressed disappointment that Brown refused San Francisco Sheriff Michael Hennessey‘s request to opt out of the program in May. Secretary of Homeland Security Janet Napolitano confirmed to the Washington Post that ICE does not “consider Secure Communities an opt-in, opt-out program.”

City officials and activists claim S-Comm makes individuals fearful of cooperating with the police in reporting and solving crimes.

“This law affects our community as a whole because if an undocumented person sees somebody getting robbed or killed, they are more likely to not call the police for help out of fear even more that they will be deported in the process,” Esteva said.

The San Francisco Board of Supervisors approved a resolution in May to boycott Arizona’s Senate Bill 1070 immigration law. They compared it to S-Comm saying, “Secure Communities police/ICE collaboration program, like Arizona SB 1070, compromises the safety of local communities by eroding the hard- earned trust built over the past decades between community members and local law enforcement.”

“I know many people who has been deported for not having papers and it is extremely sad to hear the stories of people who have been affected by it,” he said.