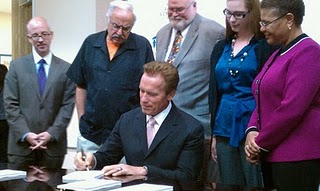 Foster children will now have the choice to remain in foster homes till age 21 or move out at 18 with federal assistance. The California Fostering Connections to Success Act, signed by Gov. Schwarzenegger on Sept. 30 has made this possible for thousands of foster youth who under current law are legally emancipated without state support at age 18.

The legislation, also known as Assembly Bill 12, will be effective January 2012 and will require youth to attend school, college, career oriented programs or work a minimum of 80 hours a month in order to receive funding. The bill also provides transitional housing support to those who qualify until age 21.

Amy Lemley, policy director for the John Burton Foundation for Children without Homes in San Francisco, said the bill is an entitlement and “if all of California’s foster youth elect to participate, we are legally required to pay for them.”

San Francisco had an estimated 189 foster children emancipated within the last year according the database of the California Department of Social Services and the University of California at Berkeley. California had a total of 63,553 foster youth last year of which 5,332 were emancipated.

Carroll Schroeder, executive director of the California Alliance of Child and Family Services, a co-sponsor of the bill said, “AB-12 takes advantage of funding opportunities provided for the first time by the federal government toward California’s Foster care system.”

SF State communications major and former Guardian Scholar, Jewel Boone, 19, said statistics provide data on the number of kids in foster care, but does not provide information on how it impacts them directly.

“Identity issues of not knowing who you are is a psychological task and a big responsibility for children and young adults,” Boone said.

Boone was declared a “ward of the court” since birth and has been placed with two foster families. Last year she was legally emancipated without choice after turning 18. Boone enrolled in SF State through the support of the Guardian Scholars Program, an organization founded under the mission to “create a system of support that will meet the academic, social, emotional, and financial needs of college-bound students who are transitioning out of the foster care system.”

She still considers herself “one of the few lucky enough to have a strong family support system.” She said a lot of her friends in the foster care system did not have that. “A friend of mine was kicked out at 11:58 p.m on his 18th birthday along with a bag that had all his things in it,” she said.

Boone credits the Guardian Scholars program at SF State for supporting people like herself.

“Without the state’s funding programs for foster care, chances of going to college is almost an impossible battle,” she said. “There would be no alternative for students like me, and I would not be able to afford SF State.”

Amid celebrations of the bill’s passing, Richard Wexler, executive director of the National Coalition for Child Protection Reform said AB-12 does not solve the problems faced by foster youth. “It’s not enough because the this bill simply makes it less bad than other wise.”

Wexler compares this bill to a “catch-22” scenario. “It’s a case of treating the wrong wound when a worse wound is hidden and unseen.” He said AB-12 simply funds the foster families to allow the foster care youth to stay in their foster homes until age 21 with at least three meals a day, and “one would hope that love and support from the foster family would also be there.”

Wexler said the real problem is children being placed into foster care when they don’t need to be. “Poverty, neglect, and housing for homeless parents separate children from their families, which could simply be solved by providing decent housing and daycare centers for single parents,” he said.

Boone acknowledges that the Foster Care system is still a “fairly flawed system, and a lot needs to be done to improve it.”

She said, “Sometimes the system just reinforces the disadvantages we feel but legislation such as AB-12 is the move in the right direction.”

Currently the Transitional Housing Placement Plus Program administered by the California Department of Social Services is able to assist one out of five foster youth after they are emancipated according to Lemley. “Now, they do not have to compete for the limited number of slots available, instead every one of them would be helped if they voluntarily elect to enroll in the program.”